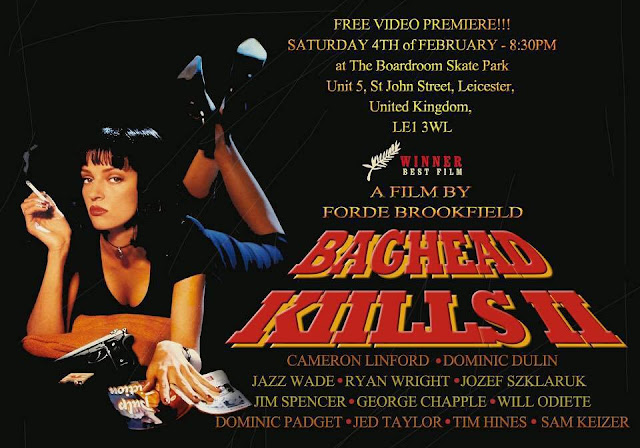 Hey Forde, Congrats on finishing the video, how long did it take to film and then edit? This video took just over two years and around two months to edit. The first one was under two years and edited within two weeks, so I certainly tried to pay a little more attention to this video!


What keeps you motivated to film? I always feel bad telling you ‘next try!’ I just love filming skateboarding – all types of it. Apart from demos or park footage, that shit bores me so badly. Next try never bothers me too much; I’ve been filming a trick with people before for hours, maybe even over the course of a few days. I think it’s something we all grow used to. That’s why it’s such an amazing feeling when someone nails a line or trick first go, it’s kind of like “Oh shit, well that’s that then...”


Have you done anything different from the first video? I know it’s going to feature some new people. I’ve made sure that my lens isn’t scratched, that’s the main thing. I’ve also tried to film it all on one camera, but there’s a little VX1-Hi8 footage in there for Jaspers part and a little foreign footage to compensate for a part that was cut short due to unforeseen circumstances.

It features a whole new crew of people mixed with some of the OG’s like Ryan Wright, Jazz Wade, and Jim Spencer. There’s a ton of new faces in it like Jozef Szklaruk, Jasper Clough, Cameron Linford, Dominic Dulin (from the U.S) and a few more. It also includes a few youngers that are smashing it in the Leicester scene.


Did anyone surprise you whilst filming the video? Jazz Wade. Pure dedication.


It is a little off topic but you worked at Ledge (R.I.P) for many years and pretty much where I met all the Baghead guys, do you think independent skate shop are losing their importance? Certainly! It’s always the same scenario, lurkers want discount which is STILL taking money away from the store as they’re obviously not taking as much as they should be, but then skateboarders still complain that they can find it online from some bullshit factory, eBay or find a similar shitter pair in a store that has them at half price because they’re dead stock. Our scene has taken a major hit from the loss of such a central skate store.

Thankfully, Paul Cartwright has opened up his own store in Leicester under the simplistic name “Cartwrights” We’ve just had it’s opening day which is great – hopefully it pulls together the scene and people within our scene finally open their eyes and see that we have to support what we have because once it’s gone, that’s it, your central meeting point for you to hang out and meet all your friends has gone. Fucking support man, fuck chain stores that run family owned and skater owned business into the ground.

Both Baghead videos are filmed with a VX do you think you’ll ever make the switch to HD? The third instalment is set to be in HD, but I truly do love the feel and aesthetic of the Sony VX series. I’d love a VX1000 with an MK1, but I think the VX1000 picture is a little dog shit, so I might have to find an MK1 intermediate and put it on a new VX2100, because my VX21 is on its last legs. As soon as she goes, that’ll be my third broken VX, haha. R.I.P to the pre-fallen VX soldiers that got smashed through filming the Baghead Crew.

For anyone that hasn’t heard of Baghead what would you say to get them to come to the premier? It’s gonna be fucking sick, it features every type of skateboarding you could want all mixed into one. It’s not like some G shit video where everything is baggy and handrails and it’s not a full mosher video with very and grabs, it’s a complete mix of every type of skateboarding. Not only that, it’s got some fucking good graphics throughout, the soundtrack is banging and we’ve put in a lot of effort for it.

Plus the list of people are in it are fucking sick.


Good place to leave it, anyone you would like to thank? Timothy Hines, Sidewalk Magazine, Ledge Skate Shop (RIP), Caught in the Crossfire, Pixels, Cartwrights Skate Store, Joe Vozza, Callun Loomes, Samuel North, Chris Straw, Broom Skatepark, Myself, Jazz Wade for sitting with me for two months making sure I didn’t hang myself whilst editing the video and everyone else along the way who provided transport, food, drinks and floors to sleep on.

Come and watch BAGHEAD KIILLS II for free at The Boardroom Skatepark on Saturday 4th of February, 2017 at 8:30pm for free.
Posted by TimH at 09:22